Born as the eldest daughter of the Noh Okura-ryu Kotsuzumikata Soke family that has continued from the Muromachi period.
From Showa Women's University kindergarten, graduated from Showa Women's University specializing in cultural history in the department of Human Cultures.
Was the first class to be part of the Ministry of Education’s study abroad support program “Tobitate! Study abroad JAPAN” and studied abroad in London, New York, and Bali.
Joined a major advertising agency in 2016. Independent since April 2019.
Started activities in events and media related to traditional cultures.

August 2019:
On TBS’s “Sekai Fushigi hakken!(Discovery of the World's Mysteries)”)starred as a Mystery Hunter in the episode of Manyoshu.

December 2013:
Starred as a Mystery Hunter for TBS’s “Sekai Fusigi hakken!(Discovery of the World's Mysteries)” in the 1300th episode special selected from 7,714 applicants. 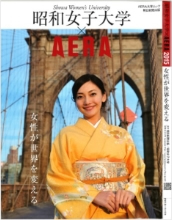